Statement on my artwork in Mexico 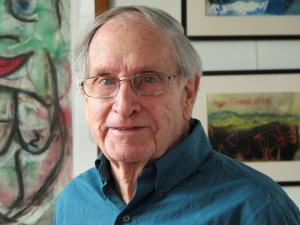 In perfecting and using my wet-in-wet technique, with bold and vibrant color, my work consistently focuses on two larger themes either directly or suggestively: Figuration and landscape; both often treated expressionistically with abstract elements; combining the two as representationally abstract. For paper, I use Stonehenge, it can withstand the impasto and many layers of medium employed. Chapapote is used in a many of my paintings, I wanted something that was of Mexico and could provide artistically the brown tones I sought in my figurative and landscape work. “No other artist in Mexico, to my knowledge, has created a body of work using chapapote as impressive as Salazar or has established it as medium worthy of consideration.” Guillermo Zajaruas, CEO, Aura Galleria, Mexico, D.F.

Most of my art is done in a series; that might start with a specific number in mind, or may just present itself to me in the doing of the work. Along with a series, and now able to present the art on the Internet, I write and publish e-books to inform on what the ‘series’ represents, sometimes to educate people on an important economic, political or social injustice. I write in a balanced way; I try to not be judgmental of others or the issues that are involved.

Statement of my artwork in Maine

I resided in Mexico over three decades bridging the 20th and 21st centuries. I returned to Maine in 2012 for personal reasons where I established as a goal for my paintings in Maine to seek to express Maine’s true essence. For I paint ‘Maine’ as unforgiving, the land, sea and sky as uncompromising, demanding your daily awareness, and testing your ability to live with nature as a constant in your life. A reviewer commented: “These works all seem to have a topological quality but with an expressionist feel. There is an underlying force-sort of a life force-in many of these pieces. The pieces seem alive, on the verge of change, as it seems to be the case for the land and sea. His treatment of Maine “landscapes” with innovative techniques gives Salazar’s work a real dynamism.”

In the sixteen years that master painter Salazar has been making San Miguel de Allende, Gto, Mexico his part time home he has acquired a distinctive style and vibrant coloring probably influenced by the magical light that envelops this beautiful town in central Mexico. His landscapes transmit the geographical beauty of this area, as well as the myriad of faces portrayed as if these were commissioned portraits of imaginary people. His technique is unique, utilizing a masterful combination of mixed media, using chapapote or tar to enhance the magnificent end result; a rich work of art that reflects the singular talent and personality of this fine artist.

John Latham Knapp, curator, painter, and sculptor who taught at Boston College, New England College and at the Manchester Institute.

Salazar’s paintings in his Mexican residency are based on the insights and visions he gained from the Mexican people, their culture and land. His work not only reflects the textures and colors of its landscape, incorporating the natural tar chapapote into his canvases, but it also engages him in the discovery and power of myth. Myth explains the world, it informs culture. Salazar’s personal visions of native deities, strong black lines bathed in the warm brown tone of chapapote, and the simple lines and muted colors of many of his landscape renderings reflect this elemental connection of the natural world to culture and myth.

February 1991 Museum of Queretaro: A National Exhibition by members of the Society of Mexican artists: invited exhibitor.

February 1995 “My Funny Valentine” Juried exhibition of 11 poets paired with 11 artists around the theme of love: Danforth Gallery, Portland, Maine

1993-1999 “New Directions in the Visual Arts” A video series produced for the educational market. An effort by students at the Southern Maine Technical College, who produced the artist profiles. Rose selected the visual artists. Over 30 videos of visual artists have been produced, and a number are aired on public broadcasting. Part of the series produced are available through Chip Taylor Communications.

February-March 2008 “Once Again, Breaking the Barrier, of the Self’, at Estudio Salazar Galleria, Mexico

Writing Residency in Mexico: 2007-2012 During this period I prepared nine e-art books and prepared a memoir for publication.

2016-Down East magazine, Maine, Selected “Snow on the Hill” painting for the Annul “Art of Giving” event held by Down East Inc.. Art featured in the July 2016 issue of Down East and donated to non-profit Community Partners at a Gala held at Point Pont, Scarborough, ME, Sept 1 Art Jurors: artist Eric Hopkins art critic Edgar Allen Beem, Dean Ian Anderson, Maine College of Art, and Down East editor in chief Kathleen Fleury.

October 2018, planning underway at the USM Orono, Emera Planetarium: “Solar Flares: Our Cosmic Life on ‘Spaceship Earth”‘ Planned for display my Solar Flares series of art and “solar flares”: displayed on the dome at the Planetarium, with educational components. This is by Dr. Shawn Laatsch, President of the Inter-planetarium Society. Planetarium show is to travel to other USA & international planetarium venues: Dr Laatsch/Salazar presenters.

My Father’s Room, & the Four Seasons of the Master Myth, reading from my memoir and images on the DVD which accompanies my book. Sala Quetzal, Biblioteca Publica, San Miguel de Allende, Mexico, March 2007

If Only … A collaboration with Bill Pearlman Mexican Vibrations, Vibraciones Mexicanas

Twenty A Magical Number: Convergence: 2002; & Tonalpohalli: the Count of Fate Mexican Secrets, Estrangement and Once Again … Alone; with poems by Bill Pearlman The Chaos Trilogy: The Eight Forces in Chaos; ‘Strange Attractors’ in Sal-Zar;

And Eyeless in Gaza