My Father’s Room is a 135-page book with forty black-and-white images with a full-color cover. The Four Seasons of the Master Myth is a 25-minute DVD with free extras including a slide show of 1000 images from “Four Seasons,” the full score of Four Seasons by Vivaldi, and the complete interview of the artist Salazar.

About My Father’s Room

My Father’s Room is a memoir from artist Roland Salazar Rose who draws on his life’s history and relationship with his father, which has been strained and the impact of his divorce in the process. In the included companion work The Four Seasons of the Master Myth, he discusses his influences as an artist. With much to ponder about what creates us, My Father’s Room is a strong addition to memoir and art collections.”—The Midwest Book Review, Oregon, WI, 2013

TO ACCESS THE MEMOIR MY FATHER’S ROOM USE THIS LINK

About The Four Seasons of the Master Myth

DVD The Four Seasons of the Master Myth, written/narrated/produced by Roland Salazar Rose: Commentary by filmmaker and editor Jef Taylor

“The Four Seasons of the Master Myth is a unique combination of words, images, music, and video of the artist at work in his studio that captures the thoughts, philosophy, and art of seasoned painter Roland Salazar Rose. Written and narrated by the artist himself Salazar ruminates on his Four Seasons of the Master Myth philosophy and how it ties into his work particularly the 1000 images he created during his years in Mexico, while video of him painting in his studio in Maine is interspersed with photographs of his work. The four sections of the video each reflect a “season” of Salazar’s life, in which he reads from his memoir, My Father’s Room, and reflects candidly on his “Four Seasons” with both humor and insight. It is a fascinating and compelling portrait of a man—Roland – looking back on his life, and an artist—Salazar—discussing his life’s work as we watch him create new work, and continue his path through the Four Seasons of the Master Myth.”

TO ACCESS THE FOUR SEASONS OF THE MASTER MYTH DVD USE THIS LINK:

The Maine Arts Commission awarded Roland Salazar Rose a grant for the production and publication of an e-pub titled Solar Flares & Salazar: An Art/Science Collaboration. According to the artist Salazar:“The project goal is to call attention to the existential threat now posed to our environment by climate change, and the critical need for us to be responsible environmental stewards on “Spaceship Earth.”

“Solar Flares” is a collaborative art/science project. Mr. Shawn Laatsch, Director of the Emera Astronomy Center UM, Orono, Maine, produced the Dome projection of “Solar Flares & Salazar,” with music, narration and technical support from Duane Shimmel, Director, Center for Innovation and Learning, UMO; and script by curator John Ripton PhD, art by Roland Salazar Rose. The collaborative art/science event at Emera Astronomy Center displayed on the Dome of the planetarium: five public evening performances were held in November 2018. “Solar Flares & Salazar” will be available for schools and other planetarium venues; Director Shawn Laatsch is past president of the International Planetarium Society. 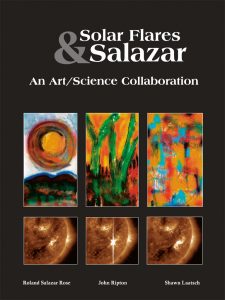