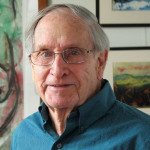 Statement on my art work

I resided in Mexico over three decades bridging the 20th and 21st centuries. I returned to Maine in 2012 for personal reasons, where I established as a goal for my paintings in Maine to seek to express Maine’s true essence. For I paint ‘Maine’ as unforgiving, the land, sea and sky as uncompromising, demanding your daily awareness, and testing your ability to live with nature as a constant in your life. A reviewer commented: “These works all seem to have a topological quality but with an expressionist feel. There is an underlying force—sort of a life force—in many of these pieces. The pieces seem alive, on the verge of change, as it seems to be the case for the land, sea and sky of Maine. Salazar’s treatment of Maine ‘landscapes’ with innovative techniques gives his work a real dynamism.”

My work includes water media, mixed media, acrylic and oil paintings on canvas, paper and wood. I have perfected a Mixed Media Medium Sal-Zar that enables me to produce work that does not have to be protected by glass. This medium has unique properties that make the work light fast, and non-yellowing. It creates exciting unusual visual effects especially when Sal-Zar is mixed with chapapote; a form of asphalt found in Mexico.

In the sixteen years that master painter Salazar has been making San Miguel de Allende, Gto, México his part time home he has acquired a distinctive style and vibrant coloring probably influenced by the magical light that envelops this beautiful town in central Mexico. His landscapes transmit the geographical beauty of this area, as well as the myriad of faces portrayed as if these were commissioned portraits of imaginary people. His technique is unique, utilizing a masterful combination of mixed media, using chapapote or tar to enhance the magnificent end result; a rich work of art that reflects the singular talent and personality of this fine artist.

John Latham Knapp, curator, painter and sculptor who taught at Boston College, New England College and at the Manchester Institute.

Salazar’s paintings in his Mexican residency are based on the insights and visions he gained from the Mexican people, their culture and land. His work not only reflects the textures and colors of its landscape, actually incorporating the natural tar chapapote into his canvases, but it also engages him in the discovery and power of myth. Myth explains the world, it informs culture. Salazar’s personal visions of native deities, strong black lines bathed in the warm brown tone of chapapote, and the simple lines and muted colors of many of his landscape renderings reflect this elemental connection of the natural world to culture and myth.

SHORT LIST: NATIONAL AND INTERNATIONAL SHOWS FROM 1989 TO 2007 (For Shows after 2007 see Last page RECENT WORK)

February 1991 Museum of Quéretaro: A National Exhibition by members of the Society of Méxican artists: invited exhibitor.

1987-2001 As Artist President of the Maine Artists’ Space I was responsible for the overall artistic direction and selection of curators for exhibitions at the Danforth Gallery. With assistance of an Advisory Board and with the management support for shows by Helen Rivas, I saw the realization of over 100 exhibitions , many with societal concerns, as well as shows that toured Maine, showing at other venues.

February 1995 “My Funny Valentine” Juried exhibition of 11 poets paired with 11 artists around the theme of love; Danforth Gallery, Portland, Maine

1993-1999 “New Directions in the Visual Arts” A video series produced for the educational market. An effort by students at the Southern Maine Technical College, who produced the artist profiles. Rose selected the visual artists. Over 30 videos of visual artists have been produced, and a number are aired on public broadcasting. Part of the series produced are available through Chip Taylor Comunications.

My Father’s Room, & the Four Seasons of the Master Myth, Reading from my memoir and images on the DVD which accompanies my book. Sala Quetzal, Biblioteca Publica, San Miguel de Allende, Mexico, March 2007

“Solar Flares & Salazar” An e-publication under a Media Grant to Salazar from the Maine Arts Commission; 2018-19 Produced and distributed on e-book platforms in the USA and other countries. A print copy is available on-line at www.salazagallery.com

The Chaos Trilogy: The Eight Forces in Chaos; ‘Strange Attractors’ in Sal-Zar;

“Learning to Walk on Cobblestones: The Mexican Way.”

Complex Transition: A series of 100 paintings on Stonehenge paper 8 x 10

2018 Abstract Not in Series: 10 paintings on Stonehenge

COVID-19 A series of ten paintings (10) on Stonehenge paper 22 x 30 to reflect on the coronavirus crisis.  A selection of four (4) (3) sent to the UMVA Journal Summer Issue. My COVID series of 10 paintings represent my artistic COVID tale in abstract formulation with figurative emphasis: our current time in space.

Creating in Isolation An Online show at the Art Center, Dover NH Oct-Nov 2020